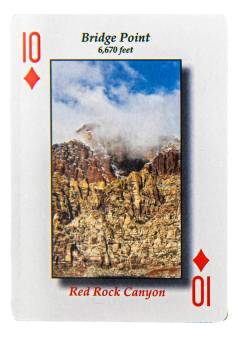 There are more than 80 mountain peaks in Southern Nevada, but most hikers will summit only a handful. One group, founded by hiking guidebook author Branch Whitney, aims considerably higher.

Whitney’s 52 Peak Club serves as an elite hiking group with hundreds of members, most of whom have one goal: Climb 52 peaks. At each summit, the climb’s leader gives every participant a playing card associated with that peak, beginning with a 2 for the easiest ones. 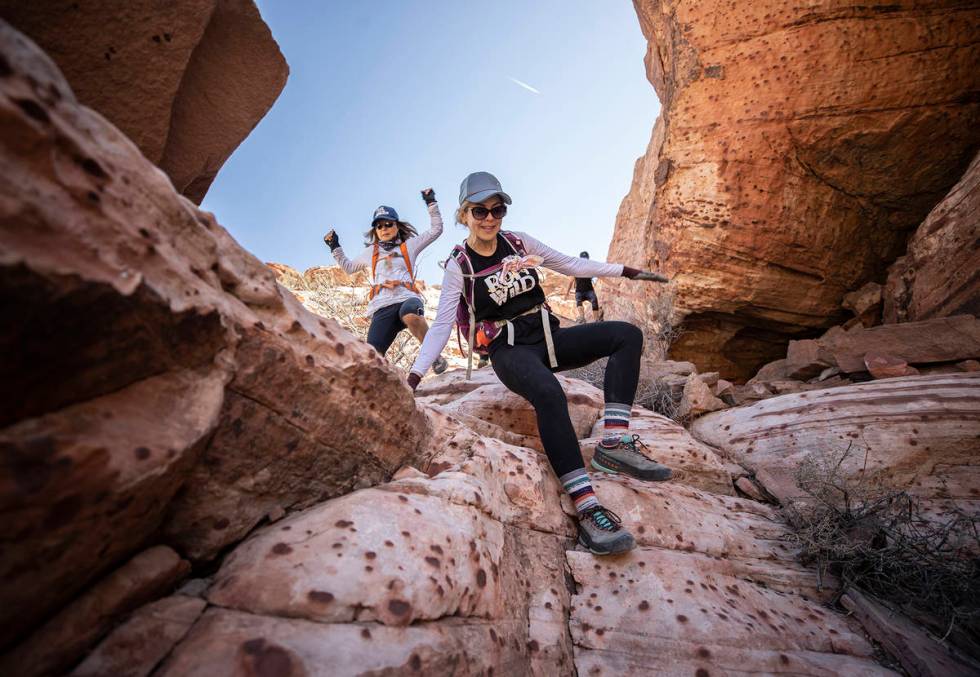 The hikers try to complete a deck and become a 53er, which usually comes with a plaque and themed party on top of Kraft Mountain in Red Rock Canyon National Conservation Area, the club’s most popular starter peak.

Before potential members can start their journey to scrambling (which requires using hands and feet to climb rock walls) or repelling (which uses ropes to hoist people up and down even steeper rocks), they must take a survey, in which Whitney assesses their fitness and experience, and asks the all important question, “Do you have a fear of heights?”

Whitney, who came to Las Vegas in 1983 and later authored the classic guidebook “Hiking Las Vegas,” started the 52 Peak Club in 2012, with help from MeetUp and the Facebook group Hiking Las Vegas, which has since garnered 9,000 members. “I wanted to be different,” he said. “I didn’t want to do a mile hike and go eat or drink. That was not the goal of this club. The goal is to promote self-confidence; the way I know is by climbing peaks.”

Some 52 Peak members work; some are retired. Some are single moms; some are just looking for a way to make friends. All are joined by their desire to see the Las Vegas Valley from the top of the highest peaks around. 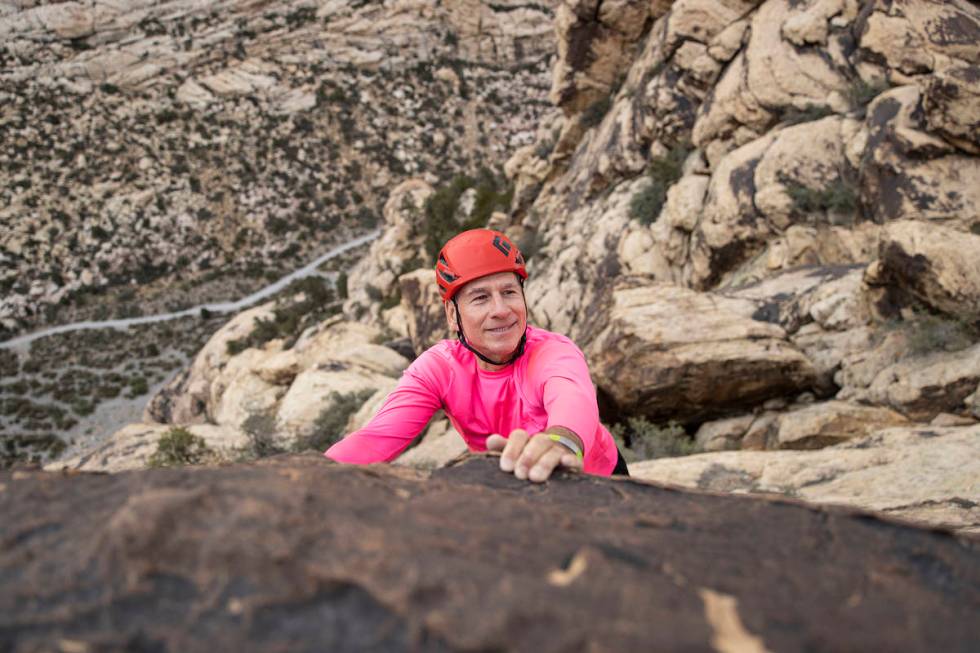 It wasn’t like Bruce Small to lag behind the group on a hike. He had joined the 52 Peak Club the previous year, 2017, after retiring from his desk job and losing 35 pounds in a bid to get healthier. “A lot of people in their 50s went through some kind of stress or weight gain and decided it was time to live their life so they got healthy, went hiking,” he recalled. He found the 52 Peak Club on a hunt for challenging, longer hikes.

But on this 2018 hike on Fortification Hill, something was wrong. The group agreed Small should lead the hike and set the pace, but 10 steps later, Small was on his back. His heart had stopped.

Another hiker administered CPR twice while they waited for rescuers. Everyone agreed that the man who performed CPR saved Small’s life. Bruce’s dad had died of a heart attack 30 days before. 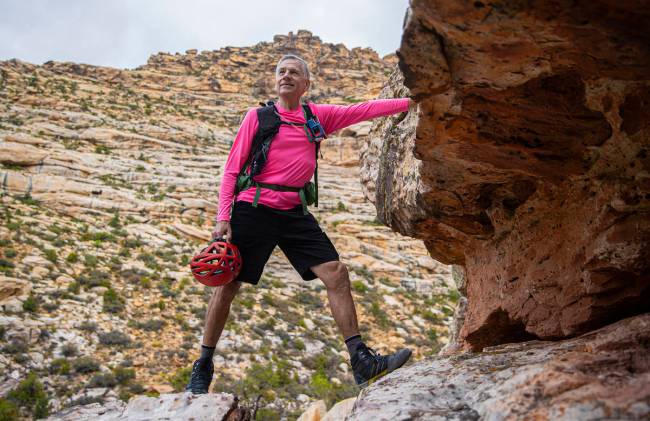 Small promised to make the rest of 2018 a year of adventure, and while pamphlets told him he needed to learn how to get out of a chair again, he traversed the Grand Canyon rim to rim, hiked the Ruby Crest Trail in Elko and logged a total of 170 miles that year. He became a 53er two months after his heart attack.

“Most people in my physical condition don’t have heart attacks, and the protocol for having a heart attack in recovery is not geared around a person like me,” Small said, remembering how hard it was to find a cardiologist who would let him get back on a trail in four weeks. “If I didn’t go hiking I would feel very depressed. It’s a major booster.”

Small completed his fifth deck in June and is working on his sixth. “Ten decks sounds like a nice round number,” he says. As a leader, he spends about 20 hours a week perusing a handmade spreadsheet with all of his top hikers to see what cards they still need. He uses Google Earth to devise challenging, off-trail hikes.

“For me, it’s life. I honestly think if I was sitting behind a desk and had a heart attack, I would have died. I was extremely overweight and inactive. As long as I stay active it’s fine.” 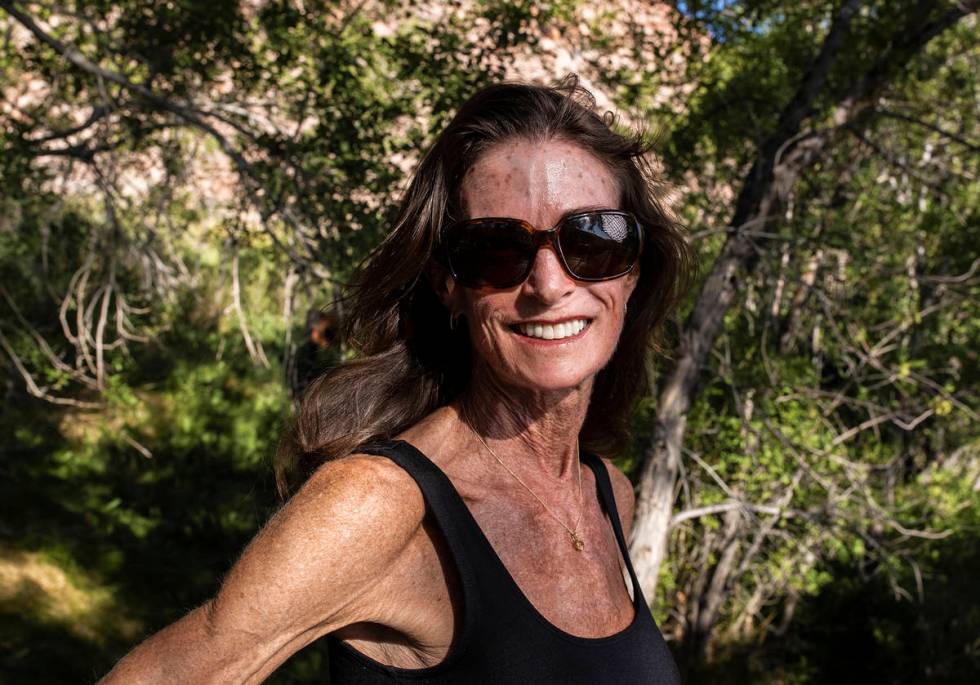 To most people, Jessica Colwill’s full-time job as a laborist would be tiring enough, but whenever there is daylight to be found after leaving the hospital, the former OB-GYN heads up the street from her house to Red Rock to scramble with her friends.

“Before I moved to Vegas the only time I hiked was on vacation,” the Pennsylvania native said. “For me it’s what I’ll be doing for the rest of my life.”

Colwill, 46, said she’s never met a face that wasn’t friendly because when everyone stands at the head of the trail, it’s not about who she is at work or in life. Everyone has the same goal and is standing on the same ground.

“I never get a feeling of people being jealous; it is seriously people building each other up,” she said. “From the beginning people are inclusive and helpful.”

Colwill hopes to collect all 52 cards before she turns 52. After a year in the club, the cards aren’t her main priority, though. Colwill said she just wants to get on as many hikes as her schedule will allow. 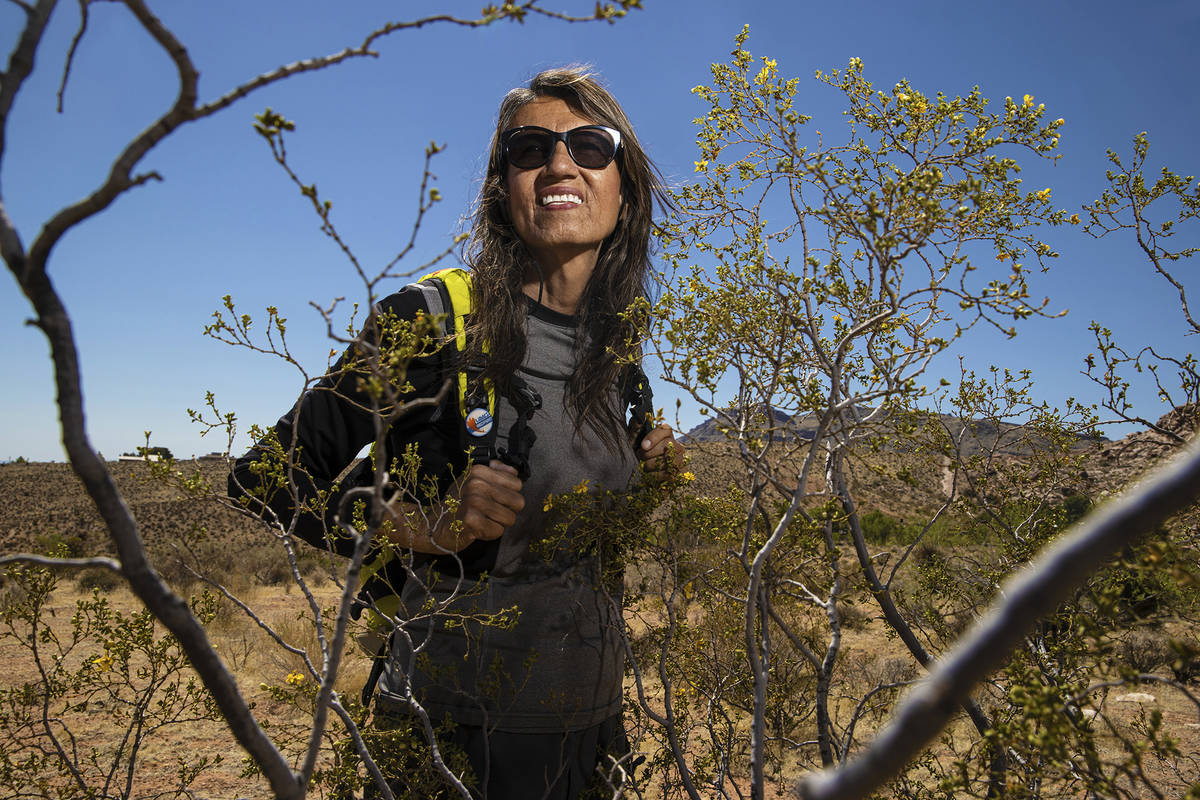 When she moved to Las Vegas from Tepic, Mexico, Dinorah Arambula looked into Red Rock Canyon and told herself that someday she would go into those cascading mountains of violet and ruby. Before she could, however, her kidneys failed. As she sat in dialysis three times a week for two years, waiting for a transplant, the soon-to-be grandmother thought about all the things she had promised to do someday. 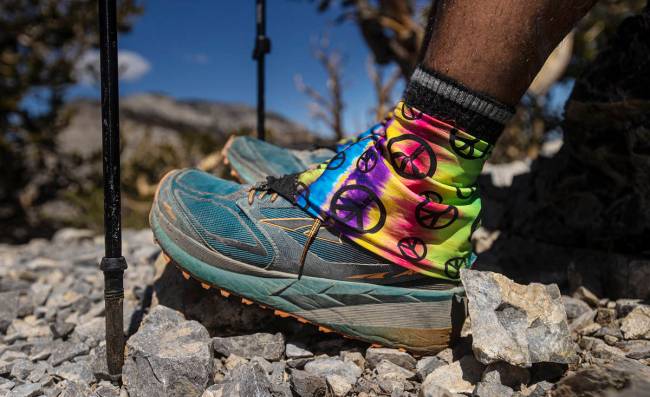 52 Peaks hiker Vince Nihonjin sticks his poles in the ground at the top of Fletcher Peak at Mount Charleston on Tuesday, May 18, 2021, outside Las Vegas. (Benjamin Hager/Las Vegas Review-Journal) @benjaminhphoto

After a kidney transplant in 2011, Arambula promised herself she would to keep this kidney healthy despite the medication it required, which she says can cause severe weight gain. She joined the 52 Peak Club the next year. And this past April, on the 10-year anniversary of her new kidney, the 58-year-old photographer finished her second deck. Although other members say she’s an inspiration, Arambula said the best part of her time with the club has been leading others to complete their decks.

“My hikes are always nice and relaxing,” she said. “I like to keep a nice pace so everybody can still enjoy the views. … During all these years there have been at least seven leaders, some who are not there anymore, who did their first hike with me. Eventually they become leaders, and that makes me feel accomplished.”

Recent knee pain has slowed her down — now, she sticks to 5-mile runs and difficult climbs weekly.

“I don’t want to go back to dialysis,” Arambula said. “I prefer to stay active and enjoy my beautiful life stronger. The best way to do that is to hike.” 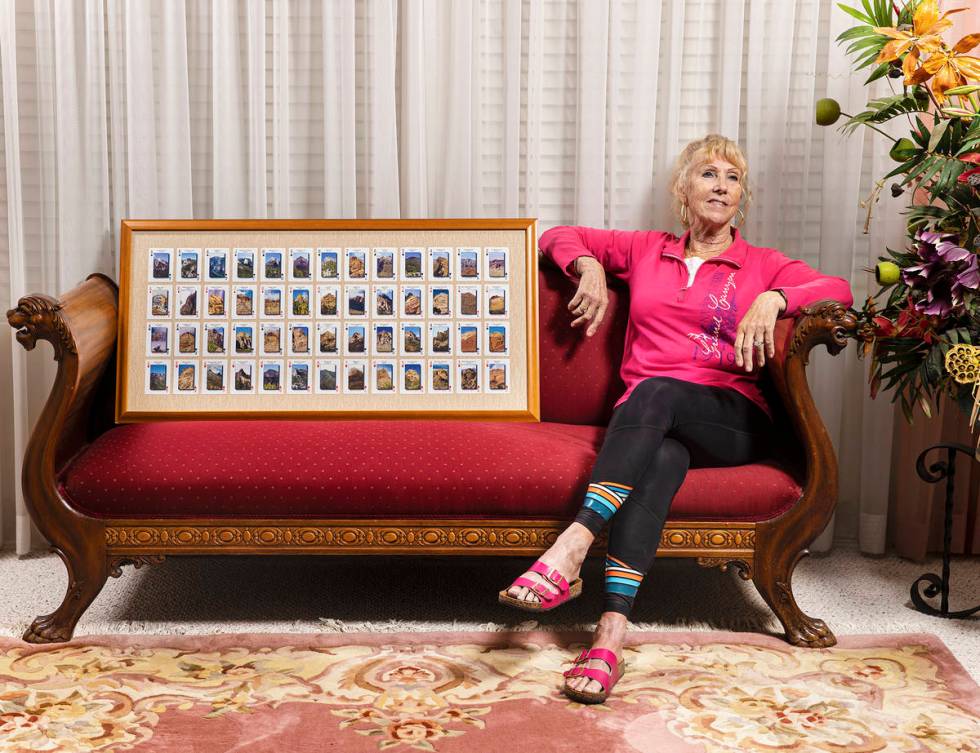 Rita Wagner found Branch Whitney’s hikes while scrolling through MeetUp in search of new friendships. The 70-year-old widow had always been active, but hiking and scrambling were new to her.

Those who remember Wagner’s first hike still talk about her white leather gloves, which Whitney immediately told her to take off to scramble up Kraft Mountain, which she eventually summited. “I never forget this look he had on his face, like, ‘Are you planning on doing another hike with me?’ I must have been shocked because I said yes,” she said. “I learned all my hiking from him.” 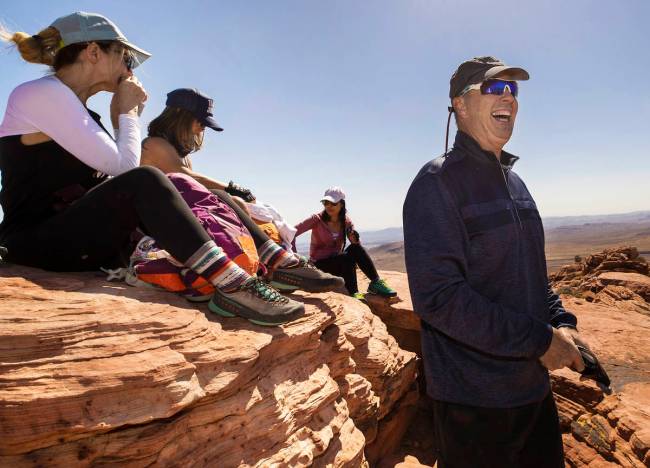 A year later, Whitney started the 52 Peak Club. “I will never do all those 52 peaks,” Wagner assured him. Thirteen months later, she became just the third 53er, and the first woman. It would have been sooner, she said, had she not taken a six-week rendezvous in Europe and an involuntary month of recovery for shoulder surgery.

Wagner’s cards hang in a frame, spread out in order in her office just above her plaque. Her greatest accomplishment, the now-82-year-old Henderson resident said, is making friends whom she now convinces to summit Mount Whitney with her as often as possible. She’s climbed it six times herself.

“I’m getting a lot of feedback from younger people saying, ‘I hope I can do what you do when I’m that old,’ ” she said. “I try to tell them, ‘Just keep hiking and enjoy what you do.’ ” 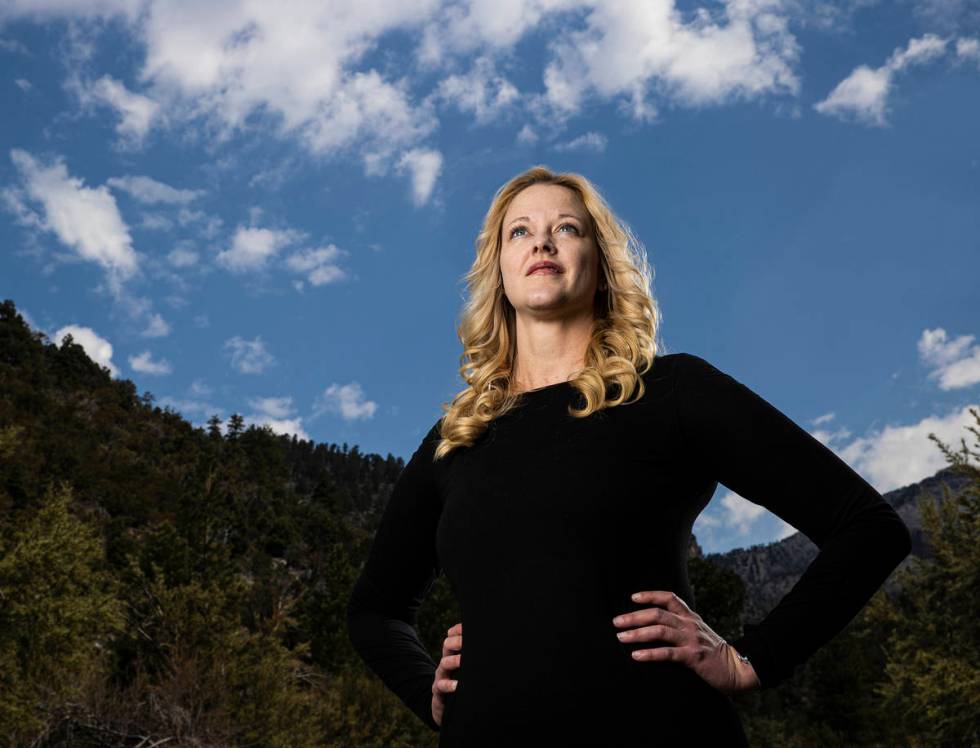 In the first three months after Amy Wolfe joined the 52 Peak Club, one of her fifth-grade students lost his life to suicide, her dad died and her husband, the CEO of a fraud management company, was arrested by the FBI — on fraud charges.

“I started to feel depleted, like I was in a rut,” she said, remembering the difficult days of summer 2020. “This club really helped to light the spark again and makes you realize just how strong you actually are by doing things you always wanted to try.”

Wolfe said it was the first time she was doing something for her own benefit, and it didn’t have to do with her son, husband or work. 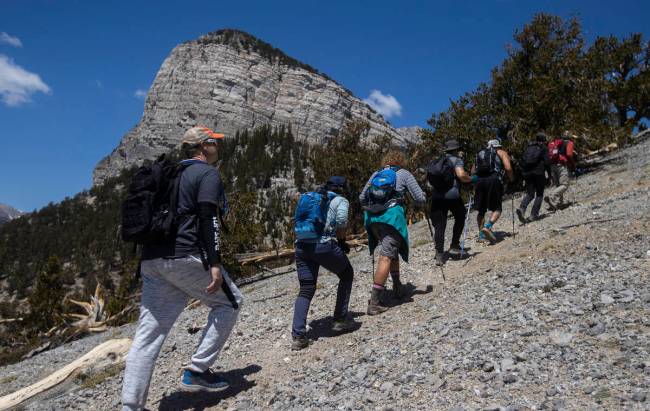 “You’re going off into the wilderness and challenging yourself with a group of people,” she said, now more than halfway through her deck. “We bond over every hike. There’s stories and inside jokes. It’s kind of hard not to make friends when you kind of have someone that has to pull you up a rock or talk you through something.”

Wolfe was feeling confused about her next steps after teaching for 13 years and spending eight of them perfecting her ability to teach fifth-grade math, which is a high-demand skill at many schools. She didn’t want to move into administration, but after summiting several peaks, Wolfe realized she could climb to a much higher goal and applied to UNLV’s psychology school for the Ph.D. program, which she began this fall. She hopes to complete her deck by next year.

“It made me realize I’m stronger than I realize and I’m pretty resilient and determined,” she said of her time in the club. “I always knew, but as a parent, when we work and there’s stress, it piles on us and we’re in that rut space. … A sense of accomplishment and having a goal does well for you as a person overall. I needed to aim a lot higher than I thought I could.”