Allegiant Stadium has a number of singular elements: the 30-foot LED flame on the Al Davis Memorial Torch, a location overlooking one of the world’s top tourist attractions.

Oh, and a head sommelier.

You don’t have to watch too many commercials to realize NFL football is more closely associated with beer than wine, and yes, plenty of suds are available in the stadium. But those in the skyboxes have access to the depth of knowledge and impeccable taste of Sandra Taylor, who oversees two wine cellars with a 500-bottle collection. 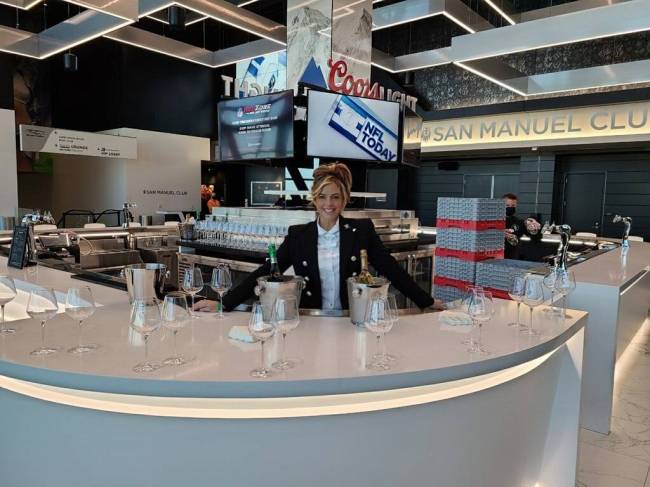 “The only other stadium that has even a slight wine program is San Francisco, because of Napa,” Taylor said. “We’re elevating football one bottle at a time.”

A variety of more commonplace wines are available to those below skybox level. But Sandy’s Reserve List is for suiteholders on Level 150. “They’re premium wines,” she said. “A Bordeaux you won’t find in any other stadium. I covered the world. I made sure there’s something for everyone.” She also arranges tastings on the suite level before and after games and at halftime.

Taylor’s career as a sommelier followed years as an actress, during which she appeared in movies including “The Princess Diaries,” “Raising Helen” and “Mother’s Day.” Garry Marshall was a mentor. “He always told me to have a Plan B,” she said. “I chose wine and threw myself into studies.”

Having worked with NFL Charities since 1991, she met Las Vegas Raiders owner Mark Davis at the 2020 Super Bowl in Miami, while the stadium was under construction. “I said we should put a beautiful wine cellar in the stadium and develop a wine program, because it is Las Vegas and it is the entertainment capital of the world,” she said.

“I feel like I’ve combined my two careers. I can still be a showman, but I have this knowledge, I have this story to tell. If they walk away having learned one little thing, one nugget of knowledge, the day is mine.”